A bassoon sounds the way it does to a great extent because it has a conical bore. That is, the whole speaking length of the bassoon including crook and reed forms a cone.

Starting at about 1mm in width at the tip of the reed, and spread more or less evenly across its entire two-and-a-half metre length, the diameter of the bassoon’s bore ends up being around 4cm at the largest end of the bell joint.

The bore of the bassoon largely determines its rich, complex sound. Many woodwind instruments, such as clarinets, have cylindrical bores, which stay the same width throughout the whole (or most) of the instrument, giving a different character to the sound – brighter and clearer.

So, why does a conical bore make a difference?

The difference comes down to the physics of how sound waves behave within a cone compared to a cylinder.

In order to understand this, we need to have a basic understanding of how harmonics work. In short, all notes (in fact, every sound produced whether musical or not) produce a fundamental tone (the tone which determines the pitch) plus numerous harmonic overtones at pitches higher than the main tone that you hear. These overtones occur at set intervals above the fundamental based on multiples of that fundamental.

The diagram shows why this is the case. The fundamental is the lowest tone generated and determines the pitch we hear; the harmonic overtones (together of course with the fundamental) determine the timbre of the sound. Different instruments emphasise the various harmonic overtones to varying degrees (in other words, make some louder or quieter than other instruments), hence the differences in timbre between them. 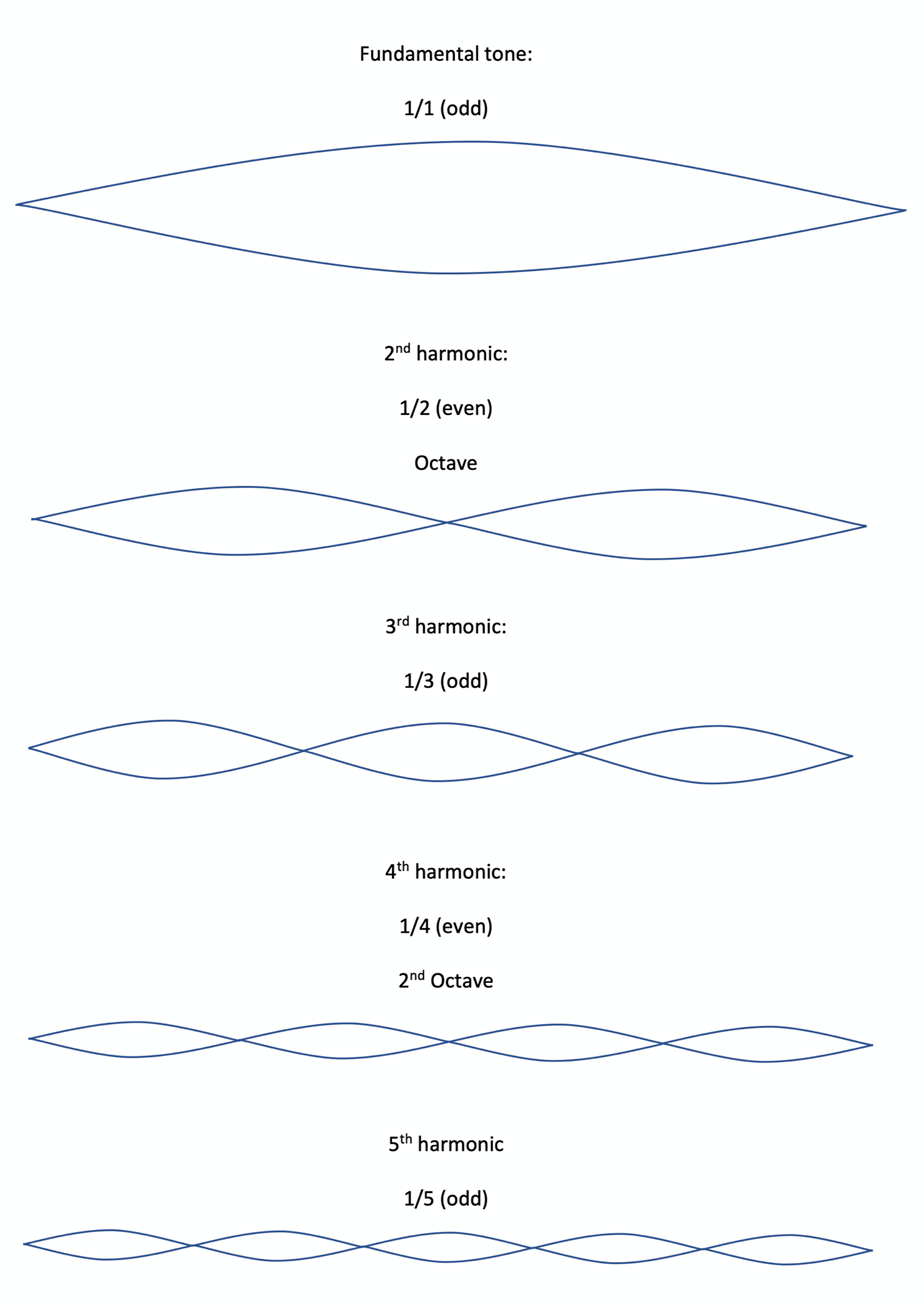 Why does the shape of the bore impact the sound we hear so dramatically?

Sound waves within a cylindrical bore

Further, the differences between instruments with cylindrical bores are partly owing to the loudness of each of the overtones compared with each other and the fundamental. A flute’s higher overtones, for example, are much attenuated and so the fundamental tone is much more pronounced, giving a particularly “pure” tone.

Sound waves within a conical bore

The sound waves within a conical bore on the other hand – such as in a bassoon – produce a harmonic structure in which both the even numbered and odd numbered harmonics are strong, which leads to a more complex, richer sound.

Further again, the differences between instruments with conical bores are partly owing to the loudness of each of the overtones compared with each other and the fundamental.

And with a bassoon having such a large range, it is particularly obvious that the loudness of the overtones compared with each other and the fundamental varies across the range, giving the characteristic change in timbre one notices as one plays up the scale from bottom to top.

It is also worth mentioning that at least some of the differences in timbre between bassoons will be caused by very small differences in bore diameter from one bassoon to another.

Interestingly, the modern bassoon’s bore is a lot more uniform than those of early baroque and classical bassoons. In many early bassoons the bore was widened or narrowed at various points to affect the sound in different ways. A good example of this on the bell joint, where the exterior of the wood bulges out into a ball shape – in early bassoons the interior of the bore would have been hollowed out to match the exterior, impacting the voicing of the bassoon. On modern bassoons, though, the bore is uniformly conical throughout, but we have retained the ball shaped bulge on the bell joint, probably purely for aesthetic purposes.

Of course, the shape of the bore is not the only aspect of the bassoon’s construction which contributes to its rich and complex sound – stay tuned for future articles in which we will outline some of the other elements, and feel free to contact us if you have any questions or further insights on this topic!