Why did you choose the bassoon? 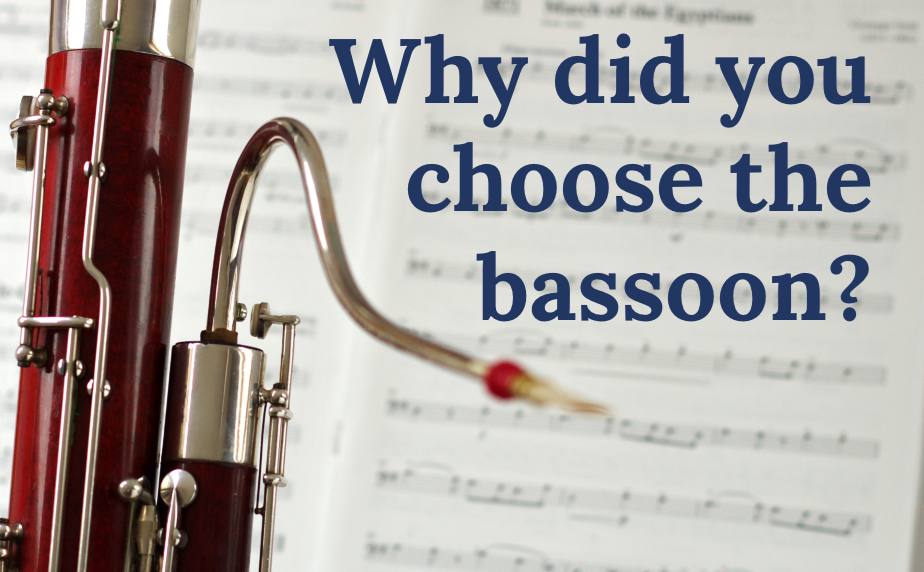 Why did you choose the bassoon?

Why did you decide to play the bassoon? The answer to this question is always fascinating, so we took to Facebook to ask the bassoon community…

"I remember playing orchestra records and loving the timbre of the bassoon." Gene Eberwine

Of the 171 answers we received, the most commonly reported influence (29%) on decisions to play the bassoon was, unsurprisingly, hearing the bassoon being played – either through a piece of recorded music, or hearing it played live.

In fact, almost 5% of bassoonists attributed their influence to a single source – Disney’s Peter and the Wolf! The next closest contenders for the most influential pieces of music were the Sorcerer’s Apprentice and Vivaldi’s E Minor respectively.

"My band teacher straight up said 'you're horrible at that. Try this' and handed me a bassoon." Jordan Pratt

The second most common influence on bassoonists was their music teacher or band director – 23% reported that they were encouraged by music leaders to play the bassoon, more often than not simply because the spot needed to be filled!

The third highest finding we drew from the answers was that 16% of bassoonists reported they chose the bassoon after becoming bored with another instrument, and so switched to the bassoon because it was more enjoyable to play and a bigger challenge to learn.

"The bassoon chose me." Dee Skinner

Astonishingly, 5% of bassoonists reportedly shun the idea that they were influenced by an outside source, instead subscribing to the (Harry Potter-esque) notion that; "the player does not choose the bassoon, the bassoon chooses the player."

"It was the best decision of my life. It is my soul-instrument." Antje Herrmann

Of all the varied answers for why bassoonists chose to play the bassoon, not one of them reported regretting that decision.

Some of the answers we received were very amusing, others were deeply heartfelt. With some necessary paraphrasing, here is a selection of the best:

The bassoon is NOT lady-like...

“I first fell in love with the bassoon having seen it stick up above all the other instruments at the Halle concerts my parents took me to. I had no idea what sound it made, but loved the look of it.

But, I was told by the Head (mistress) of the girl’s grammar school I attended that playing bassoon was NOT lady-like. Well, I'm a very stubborn person and 44 years on, I'm still loving my bassoon." Helen Homes

60 years of playing the bassoon...

I guess I did okay because during the awards part of the program I was given a trophy for the "Most Progressive Band Student. Now at age 74, I continue to play bassoon because it keeps my brain working. And, depending on the music, sometimes I get a very emotional rush which I can't really put into words, but it is very powerful.” William A. Jokela

You're horrible at that...

“I played the oboe in 7th grade and one day my band teacher straight up said 'you're horrible at that. Try this' and handed me a bassoon. Basically the best day of my life.” Jordan Pratt

“My band director asked if I’d like to learn to play the bassoon – I didn’t really know what a bassoon was, but I liked the idea of playing another instrument, so I agreed. We met with a local bassoon teacher just to make sure my hands would fit - she sat me down and put her bassoon in my hands to check. It was close enough (I needed a plateau key), and by the next school year I started lessons (with a different bassoon teacher than the one I’d met with the year before).

Some years later a very reasonably priced Puchner kind of fell into our laps to purchase. It needed a lot of work but we could tell it was a great bassoon. When we asked my teacher who to make the cheque out to, we realized it was the lady who had been teaching bassoon all those years earlier, and that was the first instrument I ever touched.” Robyn Watson

“When I was very young I remember playing orchestra records and loving the timbre of the bassoon.

Finally, when I retired I bought an instrument and got busy. A year and a half later that instrument was limiting my progress and I bought a Fox 240. I love it.” Gene Eberwine

“I'm all thumbs, so I picked a field where that is an advantage.” Chris Bonelli

If you would like to read more of the comments, or add an answer of your own, you can do so here on our Facebook page. 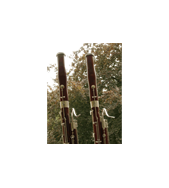 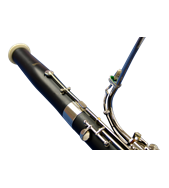