Brexit and the musical instrument market

As negotiations over Brexit progress, it is worth considering the impact Brexit is likely to have on the musical instrument sector, and particularly on purchasers, in the UK. It is difficult to forecast the precise outcome of the Brexit process, as we are still some way off reaching a deal (or conversely, not reaching a deal, of course). However, in reality the options are limited, and we can have some idea of the eventual impact of Brexit.

In this article, we will divide the musical instrument market into sales/purchases of new instruments and those of second hand instruments.

Double Reed Ltd. has been in correspondence with Liam Fox, Secretary of State for International Trade (who visited us in December 2017), and Philip Hammond, Chancellor of the Exchequer, raising our concerns and seeking to lobby for the best outcome for the UK vendors of second hand musical instruments, private and otherwise.

For more information on bringing this critical issue to the attention of your local MP go to www.parliament.uk/get-involved/contact-your-mp/. Please feel free to contact us at Double Reed Ltd. for further advice or guidance on this issue.

One potential impact is that some private UK purchasers may be dissuaded from buying from retailers in the EU because of the risk of instruments being held up in customs with all the bureaucratic problems that that involves. A bigger impact is related to returns – after Brexit, VAT (and possibly duty) will be levied by UK customs on import rather than the retailer levying their national equivalent of VAT on private purchasers at the point of shipment. This means that if you return goods after Brexit, the retailer will be able to refund you for the instrument itself but not for the VAT and duty. The purchaser will have to claim these from the UK government.

This is easy enough for VAT registered companies with professional expertise to do, but not private individuals. Whether or not it will be technically possible to reclaim this money, as things stand it will be nigh on impossible practically. Therefore, sales directly from retailers in the EU to private individuals are likely to be severely affected. This may prompt some EU retailers to set up outlets in the UK, but notwithstanding this, the trend is likely to be towards reduced competition from Europe and therefore towards increased UK prices over time.

Most good quality instruments will outlast their owners, and therefore each instrument may be sold second hand multiple times, so that the numbers of second hand instruments sold per year may be greater than new in many segments of the market.

After Brexit this will change for the UK. We will look in the rest of this article at the impact this change will have when at least one party to the transaction is a private individual – inter-company trade is not impacted in the same way.

The rules by which cross-border trade will be regulated after Brexit are yet to be determined, but the outcome for second hand private sales or purchases of musical instruments will be substantially the same whatever deal is done. This is because the issue is VAT, which is not likely to be part of any free trade or customs agreement; and not, as many commentators focus on, tariffs, which may be part of an agreement.

Tariffs for musical instruments, along with the large majority of traded goods, are low (for woodwind instruments they are generally 3.5% for example), and are therefore dwarfed by the 20% or thereabouts for VAT and its equivalent in other EU countries; so even if the tariffs were retained they would not be a big factor in any transaction - currency fluctuations would be at least as important.

Those hoping for a “soft” Brexit often cite Norway as an ideal, which has tariff-free trade between itself and the EU. However, Norway still has a VAT barrier, in that VAT is levied on goods each time they cross the border between Norway and the EU in either direction.

For companies this barrier is not particularly important – any VAT incurred can be deducted in their quarterly VAT return, and some movements of goods are subject to relief of one kind or another which the companies can access by dint of their tax expertise and VAT registration.

However, private citizens who are not VAT registered and cannot navigate the highly complex relief systems will find, first, that their sales/purchases now attract VAT when previously they did not (and any VAT incurred cannot be deducted from the next VAT return because they do not submit VAT returns). And second, that even when relief from VAT is possible in a particular transaction, they are unable either to make a claim for relief at the time of the transaction or to claim a rebate afterwards because the systems are too complicated for private citizens to successfully negotiate.

The fact that VAT will be charged at all at the border is going to have a negative impact on this cross-border trade after Brexit. But this is compounded by the fact that few prospective purchasers of second hand instruments are confident enough to make a purchase without having the right to send the instrument back after trying it.

It may technically be possible to claim this back, or even avoid it altogether at the time of import. But who is going to risk filling in the paperwork incorrectly or spending hours dealing with Customs just to try an instrument?

What can be done?

There seems no obvious reason why the current VAT arrangement could not continue with the EU after Brexit, as the systems are in place already and nobody has much to gain or lose by continuing them. In essence, it is difficult to see why VAT arrangements need to be tied to the single market. There seems no obvious reason why WTO (World Trade Organisation) regulations should prohibit it either. However, given that even Norway levies VAT at the border, it is unlikely that a UK deal would be exempt.

One obvious action which could be taken would be to exempt private sales from having VAT levied at the border by either UK or EU governments, to be negotiated as part of a Brexit agreement.

After all, with the rise of eBay and other online sales mechanisms, the growth of private and small-company trading (essentially by anyone below the VAT threshold) has grown exponentially over the last 10 years. And as it contributes to GDP, especially by promoting the re-use of instruments and other items which may otherwise be thrown away or left languishing in a cupboard, is a good that governments should in principle support and therefore deem it worth the effort.

Another action, building on this, would be to ensure that both the UK and EU introduce much-streamlined and easy-to-navigate processes for exempting second hand sales and returns from VAT at the border. Couriers, for example, already have auto-generating paperwork for outside-EU exports and imports, so mandating an expansion of those processes to cover more reliefs and exceptions would go a long way to solving the problem of the challenging paperwork currently facing exporters and importers.

Clearly, those involved in this industry, or in representing it, need to raise this situation at every opportunity.

The significance of private cross-border second hand musical instrument sales (and of other second hand goods) has grown enormously over the lasts 10 years, facilitated by the single market. Unfortunately, governments have not kept pace with this development and are not giving it the attention it deserves, and are therefore likely to over-see the demise of the trade unless some action is taken.

Sell your bassoon on commission 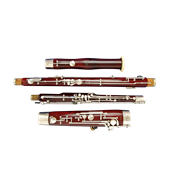