Do you identify as a bassoonist?

Do you identify as a bassoonist?

Questions of identity are an increasingly important theme in our culture. For those of us who play the bassoon the question of whether we do, or should, identify as bassoonists can be very important to how we think of ourselves.

Playing music is central to the self-identity of many, going well beyond the identity created by hobbies or even professions in other spheres, because music is so important to who we are as human beings.

I would venture to say that playing the bassoon adds to, and colours, that self-identity in a way which few other instruments do. Whether it is the complexity, the challenge, the rarity, the timbre or register, there is something vital and unique about the bassoon which appeals at the deepest level. It characterises the very strong identity which many bassoonists feel about playing their instrument, and contributes to that sense of community evident among fellow bassoonists.

Given the role the bassoon has in the formation of self-identity for so many bassoonists, why do so many of us feel some diffidence in calling ourselves bassoonists? Because we aren’t accomplished enough? Because we don’t play for a living? Because we haven’t reached certain milestones in terms of grades or mastering repertoire? Or because we only took it up (or came back to it) in later life?

None of these matter – being a bassoonist goes so much deeper with many of us than just accomplishments. If we can make music on a bassoon and gain pleasure from playing we should call ourselves bassoonists. Being a bassoonist affects our self-identities as human beings much too profoundly to be otherwise, and who is to take that away from us?

Even if you stop playing because life gets in the way, you never truly cease to be a bassoonist – you are just a bassoonist who hasn’t yet come back to playing. Maybe we ought to say that if you play another instrument, or no instrument at all, but have always loved the sound of the bassoon or hankered after playing it, then you are a bassoonist in embryo, waiting to burst out as a fully-fledged bassoonist at some point in the future.

In summary, if playing the bassoon is important to your self-identity, whatever standard you are and even whether you play currently, then you are a bassoonist, and no one should say or think otherwise. And if you are a bassoonist then what better way to fulfil your identity than by taking pleasure in playing - as much as you can, in as many settings as you can?

And if you are an embryonic bassoonist, why not start playing and, to channel Nietzsche, become the bassoonist that you are?

Does your bassoon need a repair or service?

Why not get in touch? 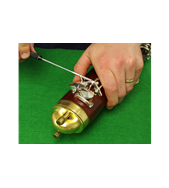