Prudent Therriot (1730-86) was one of the most eminent makers of woodwind instruments in the very late baroque/early classical periods. Based in Paris, he was apprenticed to the well-known maker Charles Bizey in 1747 and started making bassoons exclusively under his own name in 1751.

Unusually, he stamped his first name on his bassoons rather than his surname, and so his bassoons are commonly known as ‘Prudent’ bassoons.

11 originals known to have survived

Prudent Therriot made 205 bassoons in his lifetime, of which 11 are known to have survived. Most of these are in museums around the world. At least three modern makers have produced bassoons based on Prudent bassoons, illustrating his significance as a maker.

Having a great interest in bassoons from all periods, we are very excited to have acquired an old bassoon which may well be the 12th Prudent to be identified.

It is undoubtedly an authentic original bassoon rather than a modern copy, and it looks very close to the known Prudents currently identified.

Unfortunately it has been sanded and re-finished at some point, but it has very faint stamps on three of the joints which appear to match the Prudent post-1751 stamp.

It has five keys of, to our eyes, authentic design, with an additional one on the wing joint being clearly a later addition.

What do you think? Are we on to something, or is it something else altogether? Get in touch to weigh in on the discovery. 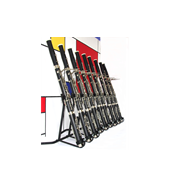