Book review: Music as an Art by Roger Scruton 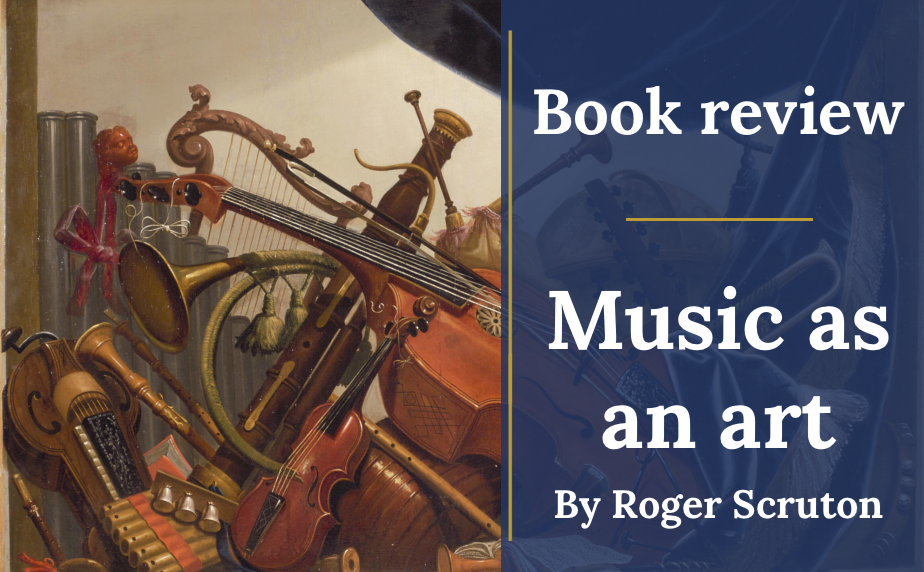 Book review: Music as an art by Roger Scruton

Book review: Music as an Art by Roger Scruton

Many people report feeling and/or thinking that something inexpressible but greater than themselves is being accessed – something of greater significance and meaning than found in day-to-day pursuits but also impossible to quite understand or pin down.

One area where this is considered is the philosophy of music, and Roger Scruton has just published his latest book on the philosophy of music which contains some interesting and accessible thoughts on what may be going on. His is not the only approach and he does have a very particular take on the topic formed by his prior philosophical commitments* and the purpose of this article is to offer a way in to the subject rather than endorse his view.

Roger Scruton’s book Music as an Art was published in late 2018 by Bloomsbury Continuum.

He is a philosopher with an interest in music and particularly in the inter-connections between music and philosophy. He has a long record of bringing complex philosophical subjects to the ordinary reader, rather than just addressing those technically-trained in philosophy.

German Idealism and the Philosophy of Music

The first part of the book outlines, in successive chapters, a view on the meaning of music in terms of how we, as listeners and perhaps more as players, experience music and what that experience is or, perhaps, means. This section of the book culminates in Chapter 6 entitled German Idealism and the Philosophy of Music.

Without the philosopher Schopenhauer, Wagner would not have conceived his operas

This chapter explores in brief the history of engagement with music from Kant to Schopenhauer in the nineteenth century (Schopenhauer having had a huge influence on Wagner among others; without Schopenhauer Wagner would not have conceived his operas, certainly not in the form in which they were created).

What Scruton takes from this exploration is the idea that somehow music allows us to penetrate and experience a realm beyond our normal cognitive experience**.

Wagner’s opera Parsifal, following Schopenhauer, is perhaps a very explicit attempt in music/drama to take us to this realm beyond our cognitive experience in the way described. However, this sort of experience, Scruton would say, is common across the canon of tonal music from around 1650 to early in the 20th century at least (without excluding other forms of music of course, but this is his focus).

While Scruton points out the apparent contradiction in saying that we can experience a world (through music or otherwise) which is inaccessible to us, he wants to hold on to the idea that through music we can have the experience of entering a transcendent world beyond what we can cognitively access while leaving the actuality of that experience as debatable.

He frames this view in careful terms and it is obviously open to debate how successful he is. But that is not necessarily the point, in that he prompts us to think perhaps more carefully ourselves about exactly what we experience when we are moved or affected by listening to or playing music.

The point of putting this review on this website, then, is both to recommend that non-philosophical musicians read the book but more importantly to prompt more thought about what exactly we are experiencing, and the meaning of that experience, when we play music (and, if applicable, when others listen to us play). Are the good feelings we have when we play in an orchestra, say, derived from doing something well, doing something in close union with others, producing sounds which fire the synapses of ourselves and others in a pleasing way, or as well as these things is something more profound going on?

Listening to or playing great music to which we are attuned can certainly make us feel as though we are experiencing something beyond ourselves and beyond what we can express in cognitive terms. And, we can sometimes feel that there is something indefinably important or meaningful going on beyond almost anything else in which we can engage ourselves.

*As a matter of interest to bassoonists, Charles Nussbaum of the University of Texas is another philosopher who is active in this area, and who happens also to play the bassoon. His philosophical commitments are very different, and therefore his take on the topic differs quite radically from Roger Scruton’s. If you are interested further, Aaron Ridley of the University of Southampton has a different take again. None of these are necessarily the foremost theoreticians in this area, but those I happen to have come across, but any of their books will provide a way in to the topic.

**idealism is, among other things, the philosophical position which posits the here-and-now world of everyday experience – sometimes called representations– against a more real world where things are as they really are rather than merely as they appear to us. This other world is beyond our experience and inaccessible to us – sometimes called transcendent or the transcendental).

Martin Ludlow, a director of Double Reed Ltd., has an MA in philosophy; his MA thesis discussed the philosophy of Kant and Levinas from the perspective of subjectivity. 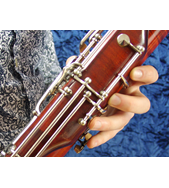