If you are sure you don’t own a bassoon with an ivory bell ring and do not contemplate ever buying one, then feel free to ignore this article. However, for everyone else this is an important (if slightly technical) topic.

How has the law changed?

The law on trading in elephant ivory changed in the UK on 6 June 2022*. It is not illegal to own ivory or an item containing ivory, but in most cases it is now illegal to buy or sell these items in the UK. There is an exception for musical instruments with a component made from ivory.

The following sets out in what circumstances this exception applies to bassoons with ivory bell rings:

The exception for musical instruments was largely brought about because of pianos.  Removing and replacing all of the ivory on the keys of a piano would be an expensive task and probably result in the scrapping of many thousands of pianos, with little or no benefit to the current elephant population.

If your bassoon has an ivory bell ring you can continue to own it without any concern, but if and when you come to sell it you will need to ensure that your bassoon complies with the above. Some bassoons continued to be fitted with ivory bell rings between 1975 and 1989 when the practice was outlawed. These bassoons must have their bell rings removed before sale because they are unable to be registered.

Although beyond the remit of this article, it is also worth mentioning that there are separate laws against taking items with ivory across international borders. While we haven’t specifically reviewed these laws, our practice (and our advice) is to remove the ivory bell ring before doing this. There is a fair chance that taking a bassoon between Great Britain and Northern Ireland and/or between Northern Ireland and the Republic of Ireland would be deemed to be crossing borders and so again we would suggest removing the bell ring before doing so.

How do I know if my bell ring is made from ivory?

It is normally fairly easy to tell if a bell ring is made from ivory by examining its colouration  and markings. Ivory bell rings are rarely even in tone throughout like plastic. If you look closely you will generally see faint cross-hatching or a chevron pattern, something absent from most plastic bell rings (although, some modern plastic manufacturers have produced faux ivory with this pattern). 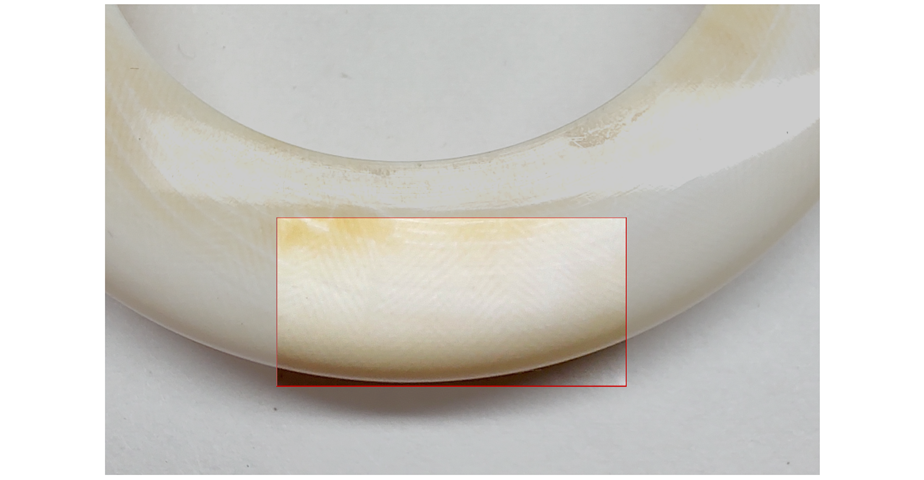 If a visual inspection is not enough to decide on the material, there are more invasive means of doing so; but we would suggest that if you aren’t sure, then proceed on the basis that it is made from ivory.

What can I do about an ivory bell ring?

As already mentioned, if you aren’t thinking of selling your bassoon, hiring it out, crossing a border with it (or sending it by courier), then you don’t need to do anything.

When the time comes to sell your bassoon, though, you need to either register it or remove the bell ring. For peace of mind you may wish to do one of these in advance of course.

Many owners of bassoons with ivory bell rings understandably wish to keep their bassoons in as original a condition as possible, and the legislation permits this. The registration route allows an owner to pass on an intact bassoon to a new owner as well. However, if you would rather avoid the hassle of registering the bassoon, are worried about being able to get together the evidence required to register it, or are concerned that an ivory bell ring may affect the bassoon’s re-sale value, then you have the option to have it removed.

How easy is it to remove an ivory bell ring?

It is not at all easy in most cases to remove an ivory bell ring, in fact it is much harder than removing a plastic bell ring. We would not, therefore, recommend that you attempt it yourself or that you ask a general woodwind repairer to do it, unless they have plenty of experience of doing so – you may well end up damaging the bell joint by either cracking it or damaging the finish.

The removal of ivory bell rings is something we have been doing for years - either because they were broken or because the bassoons were going to go overseas. However, we have also carried out quite a lot of experimentation in the past few months to hone our methods of removing them in anticipation of this new law being introduced. We replace the ivory bell rings with custom-made faux ivory ones. Faux ivory is a kind of plastic which bears some resemblance to ivory but not enough to risk the bassoon being seized by Customs.

If you have a bassoon with an ivory bell ring (or aren’t sure) and feel you would like to have it removed, either now or in the future, please talk to us about it.

*Nothing in this article should be taken as legal advice regarding laws on trading in ivory or taking ivory across borders. This article also refers to the UK only; if you live outside the UK your situation may be different.